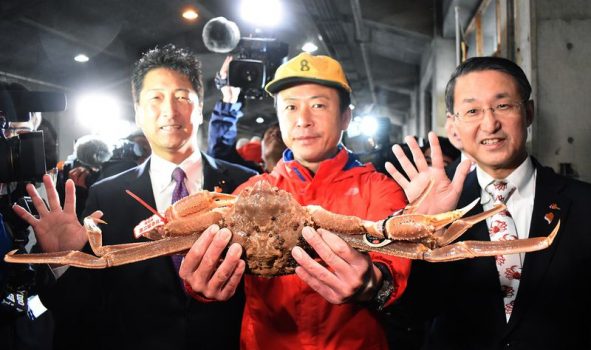 A ‘five shining star’ snow crab has been auctioned off in Tottori, Japan for a whopping 5 million yen ($46,000).

According to the Tottori prefecture’s fishery promotion division which was in charge of the auction, this is the highest-ever price paid for a snow crab.

The bid smashes the previous 2 million yen ($18,000) Guinness world record for the sale of a snow crab which was set last year also in Tottori.

The coveted male crustacean which weighed 2.7 pounds and measured 14.6 centimeters wide may eventually end up on a few lucky diners’ plates at an upscale restaurant in Tokyo’s posh Ginza neighbourhood.

“I know it’s extreme but it’s the custom. But I am sure the taste of the crab matches the price,” Hamashita told Cable News Network (CNN).

Snow crab, a highly-sought-after delicacy in Japan is found in the waters off Tottori prefecture, on Japan’s main island of Honshu, located between Osaka and Hiroshima.

Called Zuwaigani in Japanese, snow crabs are traditionally harvested during colder months and its ‘five shining star’ nickname comes not only from its shape but also its high quality long legs, fat, solid meat filling and rich creamy innards.