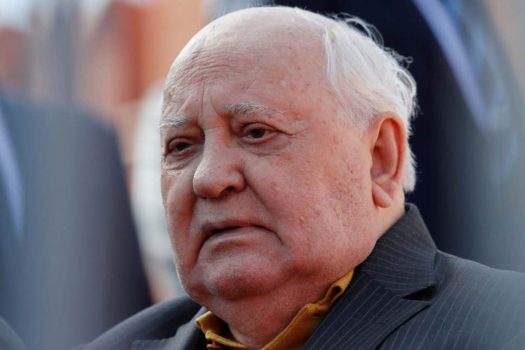 Former Russian president, Mikhail Gorbachev has warned that the world is in colossal danger and must destroy all nuclear weapons to save the planet and mankind.

In an interview with the BBC, the ex-Soviet president said tension between  Russia and the West will remain fraught as long as weapons of mass destruction exist.

“As long as weapons of mass destruction exist, primarily nuclear weapons, the danger is colossal. All nations should declare that nuclear weapons must be destroyed. This is to save ourselves and the planet,” Gorbachev said.

Describing the standoff between Russia and the West as ‘chilly, but still a war’, he added: “There are skirmishes, there is shooting, aircraft and ships are being sent here, there and everywhere.

Gorbachev’s biggest achievement was ending an arms race treaty he signed with then United States president, Ronald Reagan in 1987. The pact lasted more than 30 years and was credited with helping to bring an end to the Cold War.

The landmark agreement recently fell apart when Washington and Moscow tore up the agreement which helped secure three decades of peace between the superpowers.

The 88-year-old Gorbachev who ruled the Soviet Union from 1985 until its collapse in 1991 has in recent years been a vocal advocate for denuclearization.

Last year he criticized US president, Donald Trump for pulling out of the Intermediate-Range Nuclear Forces (INF) Treaty, which he and Ronald Reagan signed in 1987.