Bomb Explosion In Somalia Kills 79 People, Over A Hundred Injured 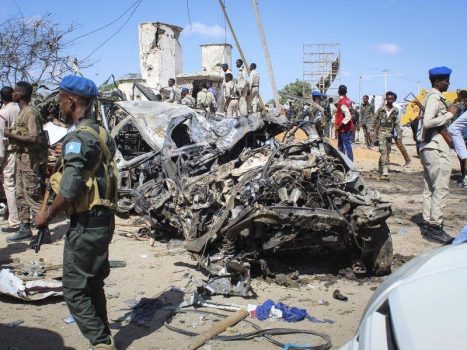 A truck bomb which exploded at a busy security checkpoint in Somalia’s capital, Mogadishu this Saturday morning has killed at least 78 people including many students. Over a hundred people were injured in the blast which Somali authorities have confirmed to be the worst attack on Mogadishu since the devastating 2017 bombing that killed hundreds.

Today’s attack happened during rush hour in the Somali capital at about 8 a.m. local time and civilians and soldiers are among the dead, police have said.

The blast targeted a tax collection centre during the morning rush hour. Those wounded include children and several university students who had been travelling on a bus.

“The number of the dead from the blast is still increasing, we now have 78 dead and 125 injured,” the director of the private Aamin Ambulance Service, Abdukadir Abdirahman Haji, told AFP news agency.

Turkey’s Foreign Minister, Mevlüt Çavuşoğlu confirmed two Turkish citizens had died in the attack.
“May Allah’s mercy be upon our two citizens and innocent Somali brothers and sisters who lost their lives in the heinous terrorist attack,” Çavuşoğlu wrote on his Twitter account. He added that Turkey would continue to stand with Somalia in the fight against terror.

There has been no immediate claim of responsibility for the attack but the terrorist group, al-Shabab is known for carrying out such attacks.