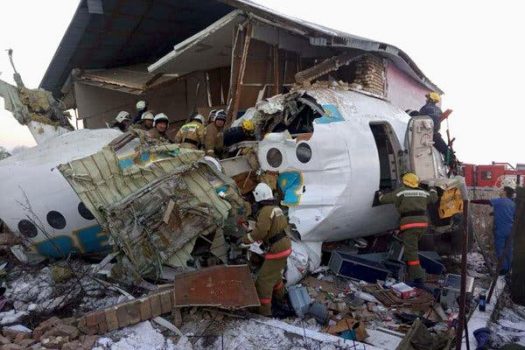 Flight Z2100, a Fokker 100 aircraft operated by Kazakhstan-based carrier, Bek Air, was scheduled to fly from Almaty, the country’s largest city, to the capital, Nur-Sultan.
The plane which was carrying 93 passengers and five crew members ‘ lost altitude after takeoff and broke through a concrete fence,’ before colliding with a two-story building at approximately 7:22 a.m. local time, according to the Almaty airport authority.

The jet’s tail also struck the runway twice during takeoff, indicating that it struggled to get off the ground, Deputy Prime Minister, Roman Sklyar said.

Fifty-four people people were reported hospitalized with injuries, at least 10 of them in critical condition. The captain of the plane was among the 12 dead

The cause of the predawn crash was unclear. Authorities quickly suspended all Bek Air and Fokker 100 flights in Kazakhstan pending the investigation.

Government officials said the jet underwent de-icing before the flight, but Nazaraliyev recalled that its wings were covered in ice, and passengers who used emergency exits over the wings slipped and fell.

Kazakhstan’s air-safety record is far from spotless. In 2009, all Kazakh airlines — with the exception of the flagship carrier Air Astana — were banned from operating in the European Union because they did not meet international safety standards. The ban was lifted in 2016.