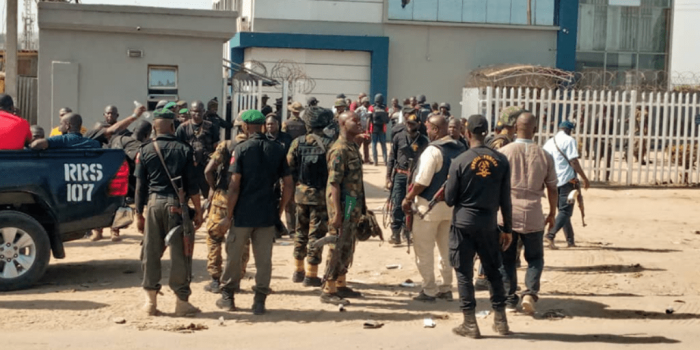 The suspects arrested for attempting to rob a First Bank of Nigeria branch at Mpape in Abuja on Saturday have reportedly indicted some employees of the financial institution.

The four suspects who were arrested in the foiled robbery are said to have told police detectives during interrogation that they were invited to carry out the robbery by some employees of the bank.

While one of the suspects was gunned down by security operatives, the remaining four members of the robbery gang were apprehended.  The number of the bank workers who are in Police custody could not be immediately confirmed.

Operatives of the Federal Capital Territory Police Command and soldiers from the Guards Brigade foiled the robbery at Mpape, a suburb located very close to the highbrow Maitama District.

The suspects had holed up in the banking hall for almost two hours until they were smoked out with teargas by security personnel who condoned off all possible escape routes.

There are claims by yet to be disclosed sources that the suspects were invited to rob the bank’s Automated Teller Machines (ATMs) believed to have been stashed with huge amounts of money to cater for customers’ cash needs during the Yuletide.