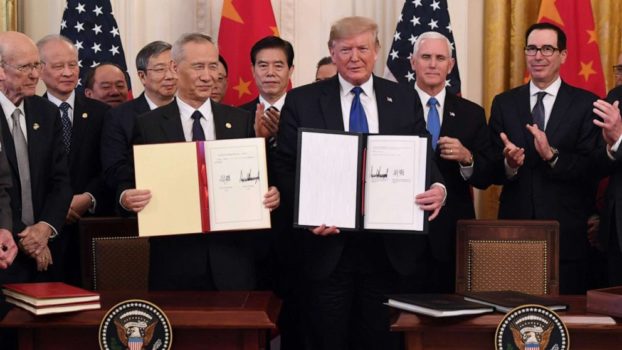 President Donald Trump on Wednesday signed an initial trade deal with senior Chinese officials which includes pledges from Beijing to more than double its purchases from American farmers in the first year.

“Together we are righting the wrongs of the past and delivering a future of economic justice and security,” Trump said.

In a letter, China’s President Xi Jinping told Trump that the agreement was a sign their two countries could resolve differences through dialogue.
The letter was read by China’s Vice Premier and top negotiator, Liu He. The deal, Xi wrote, was “good for China, the US and the whole world.”
Under the agreement, China has promised to buy an additional $12.5 billion in US agricultural products in year one, and then $19.5 billion in year two. In exchange, the United States agreed to reduce tariffs on $120 billion in Chinese products from 15% to 7.5%.
These changes are  to take effect within 30 days of the pact’s signing along with the broader deal. However, while China has agreed to purchase more US products, it has not made any specific commitments to reduce tariffs imposed on the US.
Recommended stories you may like: