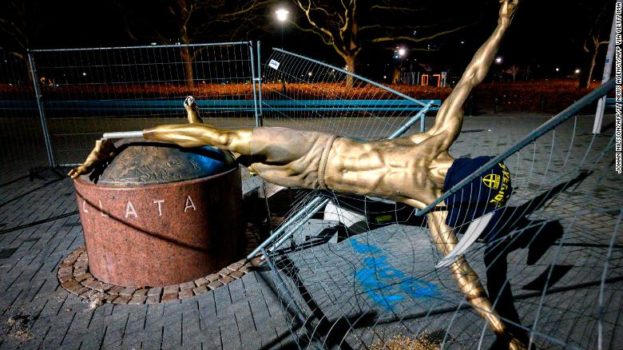 A half-tonne bronze statue of Swedish football icon, Zlatan Ibrahimovic has been toppled after vandals appeared to saw it off at the ankles.

Just the feet were left on the plinth while the rest of the body was overturned and lying on its side over a wire security fence outside Malmo’s stadium. A dark Sweden shirt was also draped over the statue’s face.

This is the latest attack on the 500kg monument which was unveiled outside his boyhood club in October by the Swedish Football Association to mark the career of one of the country’s greatest players.

Just last month, there was an attempt to saw off its legs and its nose was cut off. In November last year, vandals tried to set the statue ablaze after inscribing racist graffiti next to it.

That first attack came just hours after Ibrahimovic angered Malmo fans buying a stake in rival club, Hammarby and said he wanted to make the Stockholm-based team ‘the best in Scandinavia’.

Reacting to the incident, the Secretary General of Sweden’s Football Association, Hakan Sjostrand said: “I can understand that there is a disappointment in Malmo but it crosses all boundaries when you vandalize the statue in the way that has happened.”

No arrests have so far been made over the toppling of the statue which is currently being removed but is set to be put back up.

Ibrahimovic, who had played in the English Premier League and the American Major League Soccer recently joined Italian side, AC Milan, a club he previously played for nearly a decade ago.