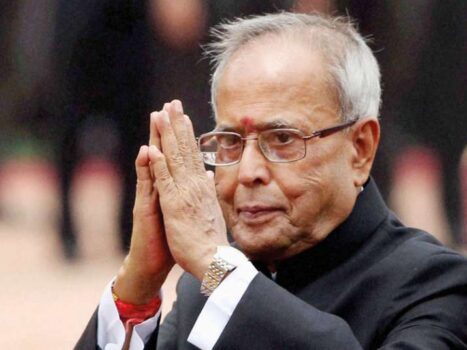 Former Indian President, Pranab Mukherjee has died at the age of 84. His death was announced via the twitter page of his son, Abhijit Mukherjee. He tweeted

“With a heavy heart, this is to inform you that my father Shri #PranabMukherjee has just passed away in spite of the best efforts of Doctors of RR Hospital & prayers, duas, and prarthanas from people throughout India! I thank all of You,”

“He has left an indelible mark on the development trajectory of our nation. A scholar par excellence, a towering statesman, he was admired across the political spectrum and by all sections of society,” Modi said.

Before undergoing brain surgery in recent weeks, he announced on Twitter that he had also tested positive for the coronavirus. He was later put on a ventilator and slipped into a coma, according to doctors who were treating him at a military hospital.

Pranab Mukherjee was elected as the thirteenth president of India in 2012. He served the remainder of his term as president under Modi, before stepping down in 2017.