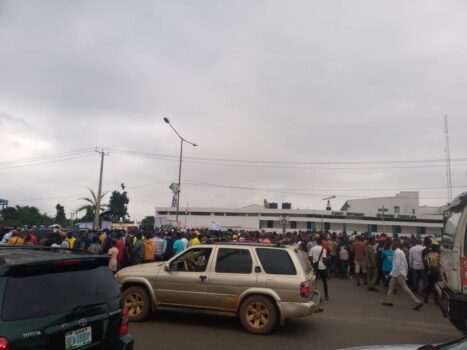 Law enforcement officials have  cordoned off the Edo State House of Assembly Complex in Benin City this Thursday morning.

Feelers at the complex indicate that the police took the action following a reported threat of an attack on the facility.

The police team was led to the Assembly Complex by the state’s Deputy Commissioner of Police (Operations), Mr Ayoola Ajala.

This latest development comes a day after members of the Assembly impeached the Deputy Speaker of the House, Hon. Yekini Idiaye.

The House  impeached Idiaye on Wednesday on grounds of alleged gross misconduct.

His impeachment came a few days after Idiaye and four other lawmakers declared their support for the governorship candidate of the All Progressives Congress (APC), Osagie Ize-Iyamu.

It was learnt that Idaiye was removed by seven  lawmakers who are supporters of the incumbent Governor of Edo State, Godwin Obaseki. Idiaye fell out of favour of the other lawmakers for endorsing Ize-Iyamu.

The member representing Orhionmwon-South constituency, Mr Roland Asoro, has since been appointed Deputy Speaker and duly sworn in  by the Speaker.