Novak Djokovic Disqualified From US Open 2020 After Unbecoming Conduct 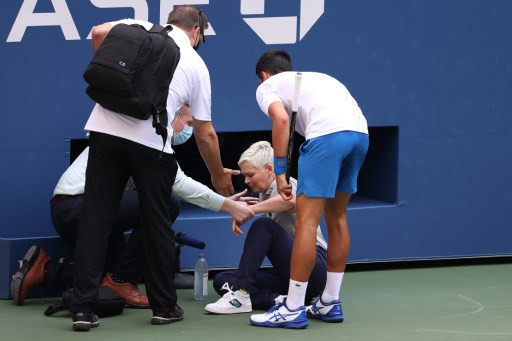 Novak Djokovic was disqualified from the US Open after hitting a lineswoman with a ball during his clash with Pablo Carreno Busta.

As he walked to the Arthur Ashe Stadium sideline for a changeover, trailing Pablo Carreño Busta 6-5 in the first set, Djokovic — who was seeded and ranked No. 1 and an overwhelming favorite for the championship — angrily smacked a ball behind him. The ball flew right at the line judge, who dropped to her knees at the back of the court and reached for her neck.

There then followed a lengthy consultation with the tournament referee, with Djokovic seemingly attempting to convince the referee and chair umpire to let him continue in his campaign but to no avail.

The ITF’s Grand Slam rule book reads: “Players shall not at any time physically abuse any official, opponent, spectator or other person within the precincts of the tournament site…

“For the purposes of this Rule, physical abuse is the unauthorised touching of an official, opponent, spectator or other person.

“The Referee in consultation with the Grand Slam Chief of Supervisors may declare a default for either a single violation of this Code or pursuant to the Point Penalty Schedule set out above.”

Djokovic’s elimination means that there will be a men’s singles first-time winner since Stan Wawrinka won the Australian Open in 2014. Rafael Nadal and Wawrinka elected to skip the tournament, while Marin Cilic and Andy Murray have been eliminated. Juan Martin Del Potro and Roger Federer are both long-term injury absentees.