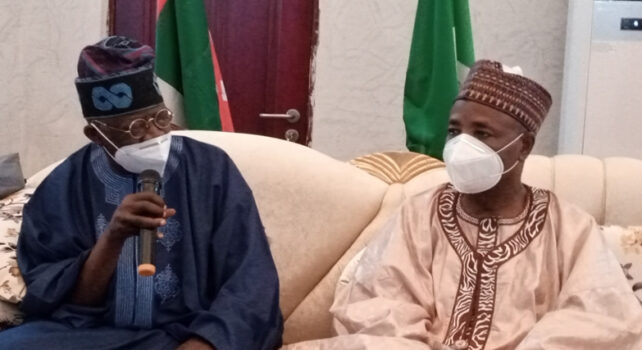 Prominent Nigerian politicians have been visiting the Sokoto home of the former governor of the state, Senator Aliyu Magatakarda Wamakko to condole with him over the death of his daughter. Those who could not make it to Sokoto have been sending messages across to the senator.

Former Lagos State governor and a national leader of the All Progressives Congress, Ahmed Bola Tinubu for instance flew all the way to Sokoto on Saturday to be with Wamakko.

One of the prominent Nigerians who have condoled with the former Sokoto State governor is former Vice President Atiku Abubakar who tweeted the following message: ” The death of Sadiya Magatakarda Wamakko following complications from childbirth is sad. As a father, it is devastating to lose a daughter.

“On behalf of my family, I convey my deepest condolences to Senator Aliyu Wamakko and his family over the loss. I pray that they be comforted. May her soul rest in peace and may her memory be a blessing.”

Senate President, Ahmed Lawan’s condolence message was sent by his Special Adviser on Media, Ola Awoniyi . Lawan told Wamakko; ” I share in your grief and pray that Allah will give you the fortitude to bear the irreparable loss”

Tinubu was accompanied to Sokoto by people who are political heavyweights in their own rights. They included Senator Adamu Aliero, a former governor of Kebbi State, Senator Tanko Al-Makura,the immediate past governor of Nasarawa State and Mr Nuhu Ribadu, former Chairman of the Economic and Financial Crimes Commission and erstwhile Presidential candidate of the of the defunct Action Congress of Nigeria, ACN.

In his own condolence message, Asiwaju Ahmed Tinubu said; “God knows what to do and we should accept it faithfully. We have been asked to accept all he ordains, in time of sorrow and happiness.

“If we lament more than this, we may be sinning hence we must accept it as an inevitable act of God.”