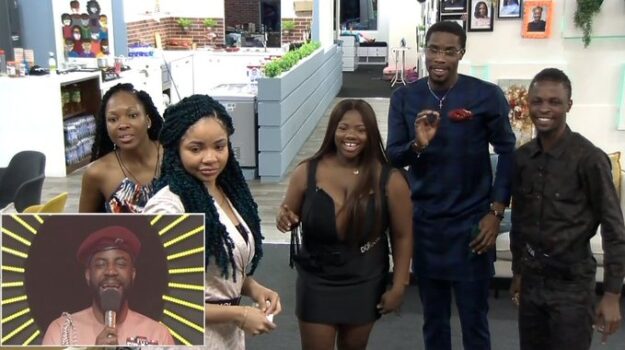 Africa’s Number One reality show, Big Brother Naija (BBNaija) has entered its finale with five of the housemates qualifying.

Those who have progressed to this stage are Nengi, Laycon, Dorathy, Neo and Vee. The stakes now, according to one watcher, are ultra high.

Progression to this stage of the show obviously created shocks. Those who were up for eviction this week were Dorathy, Ozo, Trikytee, and Laycon. Ebuka as usual was in his elements, spewing so much suspense as he left viewers wondering who the evictees would be.

Alas, Trikytee was the first housemate to be announced as evictee for the week. Trikytee gone, the focus and suspense shifted to Ozo, Dorathy and Laycon. The trio, many viewers believed, were evenly matched.

Ozo, with his romantic escapade with Nengi has been the most colourful and most commented housemate. Dorothy has won the hearts of a thousand viewers with her amiable disposition right from her first day in the house. Laycon has lately grown in confidence although many viewers still wonder what the secret of his popularity with voters really is.

The major upset came when Ebuka announced Ozo as the next housemate to leave the Big Brother House. Now, Dorathy and Lycon have joined Nengi, Neo and Vee who were not up for eviction this week, in the grand finale.

As he made to leave the house, Ozo embraced Nengi, the object of his love, passionately. Three times he tried to kiss Nengi, three times Nengi turned away. Even at that parting point, Nengi maintained her resolve not to get too close with Ozo. As he exited the house Ozo screamed: ” I love you Nengi !”

Nengi did burst into tears after Ozo left the house. Only 10 minutes later however, Nengi and the other housemates were popping champagne and eating chicken to celebrate their entry into the finale. As it happened, housemates appear to be telling the world that it is all a game after all.