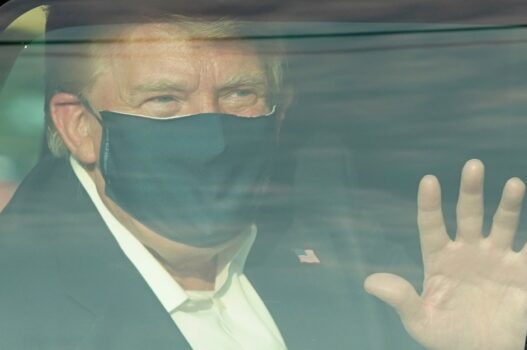 US President Donald Trump who has been hospitalised for COVID-19 infection has been slammed by critics for driving outside the medical facility on Sunday so he could wave to a group of supporters on the street.

Trump, wearing a suit and a mask, waved to supporters from the back seat of an SUV as it passed by the supporters at the Walter Reed National Military Medical Center in Bethesda, Maryland.

“I also think we’re going to pay a little surprise to some of the great patriots that we have out on the street. They’ve been out there for a long time and they’ve got Trump flags and they love our country,” Trump said in a video recorded at Walter Reed moments before he was spotted outside.

“It’s been a very interesting journey, I learned a lot about COVID,” Trump said in pre-recorded remarks. “I learned it by really going to school. This is the real school. This isn’t the let’s-read-the-book school, and I get it, and I understand it.”

Experts say the outing broke his own government’s public health guidelines requiring patients to isolate while they are in treatment and still shedding virus – and endangered his Secret Service protection.

The US president has been criticized over his handling of the coronavirus crisis that has left nearly 210,000 Americans dead, the highest death toll anywhere in the world.

Trump’s video came hours after Navy commander and White House physician Sean Conley said the president could be discharged as early as Monday.