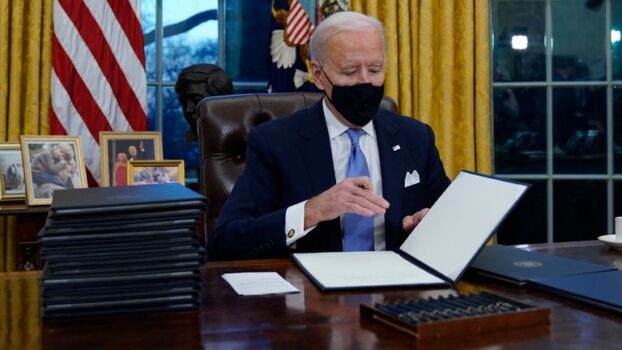 On his first day in office, President Joe Biden signed seventeen executive actions, some of which reverse decisions made by his predecessor, former President Donald Trump.

The actions, fulfilling his promise to move quickly on Day One of his presidency, initiate the process of the US rejoining the Paris climate accord, ending the “Muslim travel ban” and diverting funds from building the wall on the Mexico border. The first order he signed as president mandates face masks on all federal property.

“There’s no time to start like today,” Biden told reporters in the Oval Office as he began signing a stack of orders and memoranda. “I’m going to start by keeping the promises I made to the American people.”

Biden also reversed several of Trump’s attempts to withdraw from international agreements, beginning the process of rejoining the Paris climate accord and halting the United States’ departure from the World Health Organization.

Biden, who enters the White House during a time of historic crises, said Wednesday that he wants to move quickly to address the country’s big, urgent problems with a spirit of unity and national purpose.

February 26, 2021, No Comments on Tension As DSS, Police Attempt To Arrest Sunday Igboho

February 26, 2021, No Comments on Ondo Nurses To Commence 3-day Warning Strike On Monday

February 26, 2021, No Comments on Sheikh Gumi Hints On Identity Of Zamfara School Kidnappers

February 26, 2021, No Comments on Gunmen Abduct Over 300 Schoolgirls In Zamfara, Nigeria

February 25, 2021, No Comments on Northern Governors, Service Chiefs, Others Meet In Kaduna

February 25, 2021, No Comments on Northern Elders Slam Sheikh Gumi Over His ‘Revelation’