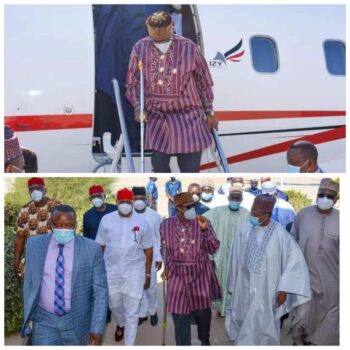 Comments have continued to trail trending photographs which captured the Minister of Transportation, Rt. Hon. Chibuike Amaechi, walking with the aid of crutches during the commissioning of an orphanage home and Arabic School in Kaita Local Government Area of Katsina State on Friday.

While details of the circumstances surrounding the minister’s sudden reliance on a walking aid seem sketchy, some Nigerians who saw the pictures said the minister may be suffering from an ankle sprain while others concluded that he may be having either plantar fascitis, hemiplegia scissors gait or motor neuron lesion and prayed for his speedy recuperation.

However, reacting to the development, a chieftain of the All Progressives Congress, erstwhile National Publicity Secretary of the defunct New Peoples Democratic Party (nPDP) and a close associate of Amaechi, Chief Eze Chukwuemeka Eze commended Nigerians for their deep concern but dismissed comments linking the minister’s use of crutches to either hemiplegia scissors gait or planter fascitis adding that Amaechi is neither suffering from knee arthritis, nor lower motor neuron lesion, describing such assertions as unfathomable.

In a statement made available to media houses, Eze said many Nigerians and people of goodwill have expressed very dreadful concerns seeing Minister Amaechi walk with crutches while on official duties and as a result, have flooded his cell phone lines trying to enquire the state of health of Nigeria’s decade best Minister and why he is relying on a walking aid.

The party chief said he was however prompted by public concern to engage the minister, who confirmed the verisimilitude of the trending photographs, Sunday morning and said he had a hairline fracture. Eze said Amaechi  assured him that he is getting pretty better.

In a conversation with Eze, Amaechi was quoted as saying : “…I had a hairline fracture on 31st December, 2020 but I have been working with it all these weeks before the public pictures showing me with crutches. Nobody should express any fear as my Doctors are on top of it”.

Eze asserted that walking and working in pains and crutches simply demonstrates the patriotic zeal and commitment of the Minister in contributing towards rebuilding Nigeria to suit the fancy of the founding fathers of the nation.

Notwithstanding, the party chief appealed to President Muhammadu Buhari to direct Amaechi to rest a little while and allow for a quick recovery from the painful fracture because according to him, Amaechi with his level of patriotism, is ready to risk his life in the service of the Nigerian nation.

While calling on Nigerians to continue to remember Amaechi in their prayers especially, for his total recovery, Eze condemned those he believed to be celebrating the temporary inconvenience involving the minister, describing them as satanic.