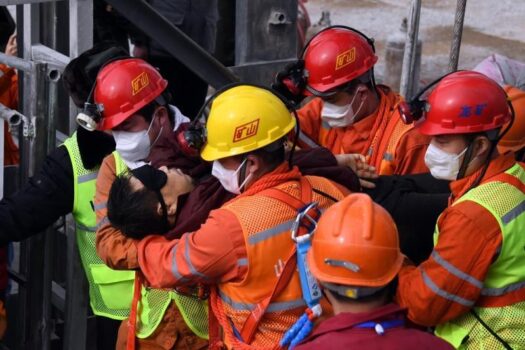 Nine more Chinese miners trapped underground for over two weeks have been confirmed dead, with one still unaccounted for, state media reported on Monday.

“From Sunday afternoon to this afternoon, rescue workers have not stopped searching, and found a further nine trapped miners who unfortunately all died,” state broadcaster CCTV quoted the mayor of Yantai city as saying.

This comes a day after 11 miners were pulled out alive from the mine in Eastern Shandong Province where the blast struck.

A group of 22 men were trapped hundreds of metres underground by an explosion at the Hushan mine in Eastern Shandong Province on Jan 10, with some relying on food and medicine delivered through long shafts drilled by rescue teams.

A minute’s silence was held at the press conference, and the four officials bowed afterwards to pay respects to the dead.

Officials said that the identities of the deceased would be confirmed through DNA testing.

The 11 survivors are in “stable” and “non life-threatening” conditions and are currently receiving medical treatment, according to Qin Chengyong, deputy head of the Shandong provincial health commission.

Two are in serious but non life-threatening conditions – including one who had not eaten for 14 days before being rescued.