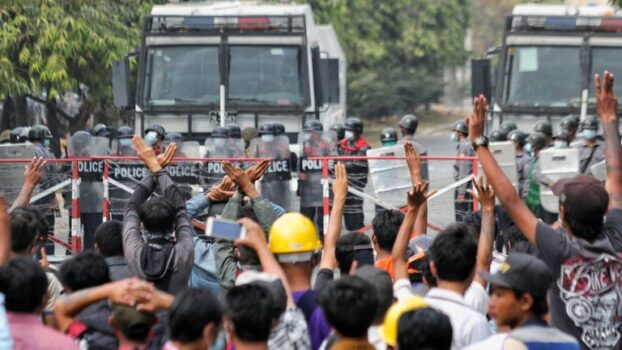 Myanmar state TV has warned that “action” will be taken against any protesters who break the law. The announcement comes as tens of thousands of people across the Southeast Asian nation have joined a third day of demonstrations after a military coup.

“It is found that protesters have raised their incitement towards riot and anarchy mob on the day of 22 February. Protesters are now inciting the people, especially emotional teenagers and youths, to a confrontation path where they will suffer the loss of life,” the State Administration Council — the name for the military junta now controlling the country — declared Sunday evening on state broadcaster MRTV.

At least two people were killed after violence over the weekend as thousands gathered on Sunday in Naypyidaw for the funeral of 20-year-old Mya Thwate Thwate Khaing, who was shot in the head at protests in the capital on February 9 and died from her injuries on Friday.

For more than two weeks, thousands of people in villages, towns and cities across Myanmar have come out to peacefully protest or take part in a non-violent civil disobedience movement against the military takeover, calling for the generals to hand back power and release of civilian leader Aung San Suu Kyi and other democratically-elected officials.