Four Bandit Leaders Surrender In Katsina, Give Up Machine Guns 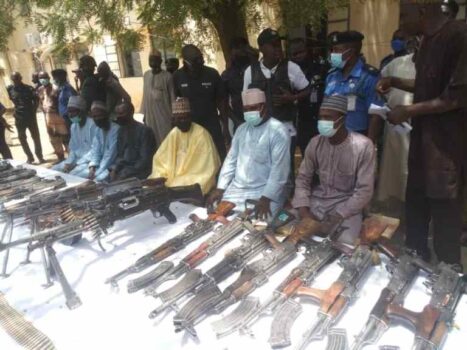 The four bandit leaders were identified as Sale Turwa, Mani Turwa, Ado Sarki, and Sani Mai-Daji and were reportedly residing in the thick forest of Illela in Safana Local Government Area of Katsina State.

The State Commissioner of Police, CP Sanusi Buba disclosed this in a press conference held at the command headquarters in Katsina.

Buba explained that their surrender is part of the Katsina State Police Command’s effort in the ongoing onslaught against banditry, armed robbery, kidnapping, and other forms of crimes and criminality in the state.

“It became absolutely imperative at this juncture, to warn other recalcitrant bandits, who refuse to surrender, that nobody has a monopoly of violence and that government is mightier than any person or group of persons,” Buba said.

“The Nigeria Police Force and indeed other sister security agencies will leave no stone unturned in isolating and dealing decisively with any individual or group of unrepentant bandits that refused to surrender and keep hibernating in the forest.

“The Command wishes to assure the good people of the state that banditry and other crimes will soon be history as the Security Forces are on top of the situation.

“Members of the public are hereby enjoined to partner with the security agencies by providing useful information that will lead to the arrest of bandits and their collaborators, please.”

It is not yet clear whether the bandits who surrendered on Thursday were granted amnesty.

The Federal Government has rejected the notion of amnesty for bandits.