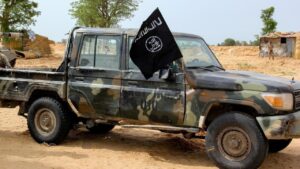 Thirteen suspected Boko Haram terrorists were arrested around Filin Lazio in the Hotoro axis of Kano State on Sunday.

The suspects were arrested by troops of 3 Brigade of the Nigerian Army during an operation in the north-west region of the country.

Brigadier General Mohammed Yerima, who is the Director of Army Public Relations, explained that the operation conducted on Saturday was part of ongoing efforts to flush out all forms of criminality within the area of responsibility.

He also asked people to keep a high level of vigilance and continue to report any suspected movement of strange persons or groups in their environment to the relevant security agencies for prompt action.

Attacks by Bo0ko Haram terrorists spanning more than a decade have left thousands killed and millions displaced in the North East.