by People & Power
May 6, 2021
Sports, Uncategorized
No Comments 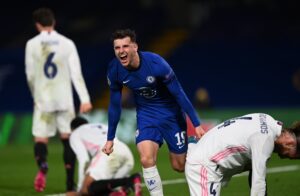 Chelsea set up an all-English Champions League final with Manchester City after beating Real Madrid 2-0 at Stamford Bridge in the semi-final second leg, going through 3-1 on aggregate.Timo Werner and Mason Mount struck as Chelsea sunk Real Madrid 2-0 at Stamford Bridge to book a Champions League final showdown with Manchester City.

Werner nodded into the empty net from one yard out in the first half, before Mount turned home Christian Pulisic’s cross late on, as Chelsea defeated Real 3-1 in the semi-finals on aggregate.

Chelsea forward Werner feels they have come a long way in a short time under Tuchel’s guidance, with the club also set for the FA Cup final having beaten City at Wembley last month.

“When we started with the manager we were 10th in the league and now we reach everything – on the road to the top four, we can win the Champions League and the FA Cup,” Werner said on BT Sport.

“Our team is incredible, what we do today.

“We did not have the ball so much as we do normally, but how we control the game and the rhythm was unbelievable against a team with world-class players in every position.

“We are young, but we not stupid to make easy mistakes, and we made it very, very good today.”

This year’s final between Chelsea and Manchester City will take place in Istanbul on Saturday May 29.