by People & Power
May 12, 2021
General, Uncategorized
No Comments 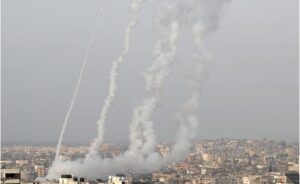 Israeli airstrikes have now killed 53 people including 14 children in Gaza.

Fourteen of those killed were minors, the Health Ministry says. Another 320 Gaza Palestinians have been wounded.

Meanwhile, rockets fired from the Strip have killed five people in Israel as hostilities between Hamas and Tel Aviv continue to rage.

Of those killed in Israel, two were in Lod, two in Ashkelon and one in Rishon LeZion. One was reportedly a child. Their deaths came amid a surge in Israeli military activity, with Benjamin Netanyahu promising to expand the offensive against Hamas and the militant group Islamic Jihad, and adding: “This will take time.”

The two sides have returned to the brink of war following weeks of confrontations, including a heavy-handed police response to worshippers gathering for Friday prayers at Jerusalem’s Al-Aqsa mosque, a site holy to both Muslims and Jews.