PDP Governors In Closed-Door Meeting In Ibadan Over Insecurity 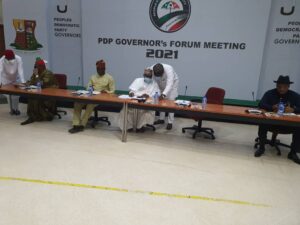 The meeting is presided over by the Forum Chairman Aminu Waziri Tambuwal and attended by 13 state governors elected on the platform of the PDP.

The governors are Aminu Tambuwal of Sokoto State; Samuel Ortom of Benue; Douye Diri of Bayelsa; Okezie Ikpeazu of Abia and Emmanuel Udom of Akwa Ibom.

Others include Ifeanyi Okowa of Delta, Ifeanyi Ugwuanyi of Enugu State, Umar Fintiri of Adamawa; Bala Mohammed of Bauchi State, Nyesom Wike of Rivers and Godwin Obaseki of Edo.

Also present is the host governor – Seyi Makinde of Oyo State and the Deputy Governor of Zamfara, Aliyu Gusau who is representing Gov. Bello Matawalle.

It is expected that Gov. Darius Ishaku, of Taraba and Gov. Ben Ayade of Cross River, would join the team as the meeting progresses.

The meeting is expected to focus on the security situation in the country.