IPOB Leader Nnamdi Kanu Re-Arrested And Repatriated Back To Nigeria 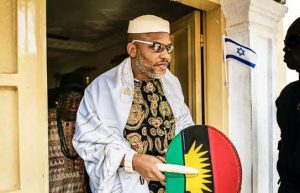 The leader of the proscribed Indigenous People of Biafra (IPOB), Nnamdi Kanu, has been re-arrested and brought back to Nigeria to face his trial, Nigeria’s Attorney General and Minister of Justice, Abubakar Malami has said.

Malami made the disclosure at a joint press briefing on Tuesday with the Department of State Security (DSS) in Abuja. He said  international collaborative efforts with security agencies led to Kanu’s arrest and repatriation to Nigeria.

According to Malami, Justice Binta Nyako of the Federal High Court in Abuja has granted the Federal Government’s application to detain the IPOB leader in a DSS facility ahead of the continuation of his trial.

Justice Nyako also granted the application for the accelerated hearing of his trial to July 26 and 27 as against the earlier adjourned date of October 20.

Nnamdi Kanu and his co-defendant are facing treasonable felony charges at the Federal High Court in Abuja.

In October 2015, he was arrested by Nigerian authorities and arraigned on an 11-count charge bordering on “terrorism, treasonable felony, managing an unlawful society, publication of defamatory  matter, illegal possession of firearms and improper importation of goods, among others.”

He was granted bail on April 2017 for medical reasons.

Kanu however fled the country in September 2017 after the military  invaded his home at Afara-Ukwu, near Umuahia in Abia State.