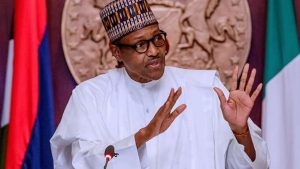 Nigerian President, Muhammadu Buhari has revealed the reason behind his determination to construct a rail line as well as roads to connect Nigeria to neighbouring Niger Republic.

According to him, it is imperative that Nigeria has a very good relationship with her neighbouring countries for the sake of security.

The Nigerian leader stated this on Thursday when he granted an exclusive interview to ARISE News.

Buhari said: “If you recall, when I came, I went to Chad, I went to Niger, I went to Cameroon. Look at what happened with Boko Haram. If we were not in a good relationship with Niger, Chad and Cameroon, Boko Haram would have done worse things to us and you say I am going to Niger.

“I told you the border between us and Niger is 1, 500km. I spoke to one French man and I had to tell him this. He spoke nonsense and I told him look, in 1885, you sat down and drew lines (boundaries). I said I have first cousins in Niger. There are Kanuris, there are Hausas, there are Fulanis in Niger Republic just as there are Yorubas in Benin. You can’t absolutely cut them off.”

He argued that the new rail would help Nigeria to compete with Benin Republic which has cornered entry port trade in the region.

Buhari said Niger, which is a landlocked nation, has discovered oil, and Nigeria does not want them to do trade through Benin Republic.