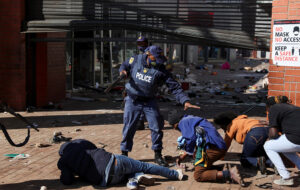 The South African military said on Monday it was deploying soldiers in two provinces, including its economic hub of Johannesburg, to help police cope with looting and arson attacks on businesses.

Soldiers could already be seen patrolling the streets of Pietermaritzburg at midday, but the army stated “deployment will begin as soon as all the processes” are in place to prepare.

“The South African National Defence Force has commenced with pre-deployment processes and procedures in line with a request for assistance received… to assist law enforcement agencies deployed in Gauteng and KwaZulu-Natal provinces respectively to quell the unrest that has gripped both Provinces in the last few days,” it said in a statement.

Looting and fires spread across the country on Monday, on the fourth day of violence initially triggered by the imprisonment of former president Jacob Zuma, and later fueled by economic desperation compounded by restrictions imposed since late June in the face of a third deadly wave of Covid-19.

Police said six people have been killed and more than 200 arrested in related protests and looting since last week.

Zuma is serving time for defying a court order to testify before a state-backed inquiry probing allegations of corruption during his term as president from 2009 to 2018.

Under the terms of his sentence, Zuma could be back home before Christmas as he would be eligible for parole in less than four months.

He separately faces 16 charges of fraud, graft and racketeering in an arms procurement scandal dating to 1999, when he was vice president.