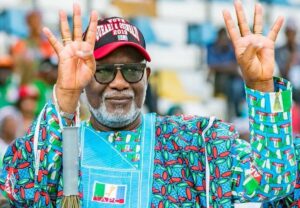 The Supreme Court on Wednesday upheld the re-election of Rotimi Akeredolu as Governor of Ondo State.

In the majority judgment delivered by Justice Emmanuel Agim, four of the seven-member panel, dismissed the appeal by Eyitayo Jegede and his party, the Peoples Democratic Party (PDP) on the grounds that it was incompetent.

Three other justices however disagreed with the majority judgement, insisting that Akeredolu’s candidacy in that election is a nullity.

The minority judgement held the view that the appeal has merit and ought not to be struck out by the appeal court.

Akeredolu was the candidate of the All Progressives Congress (APC) in October 10, 2020, governorship election in Ondo State.

The PDP and its candidate, Eyitayo Jegede had earlier approached the appeal court to challenge the candidacy of Akeredolu, insisting that his nomination form was signed by a sitting Governor Mai Buni who doubles as the Acting National Chairman of the party.

The appeal was based on the constitutional provision which forbids sitting governors from holding executive positions outside their statutory position as governors.

The Court of Appeal in Akure, the Ondo State capital, on June 16, struck out the appeal for lack of merit.