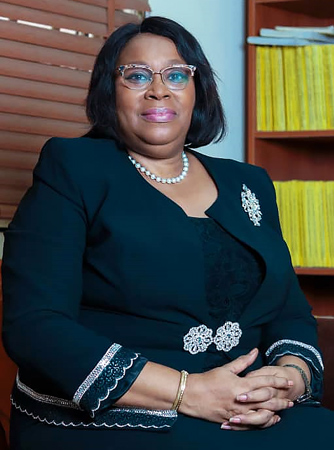 The Honourable Justice Oluwatoyin Abosede Taiwo is far from being an obscure name in the Lagos State Judiciary. She stands tall as a judge of the High Court of Lagos State.

However, beyond the province of law and justice, Oluwatoyin Taiwo is leading a cause for compassion, empathy and mercy. She is leading, through practical action and personal example, a crusade for the uplift of the poor and vulnerable among Nigerian women.

The Honourable Justice is the Founder of A Little Sleep A Little Slumber, a non – government, non – profit organization which is committed to empowering vulnerable women through what it describes as ‘all – round development’.

Essentially, A Little Sleep A Little Slumber (ALSALS for short), empowers these women by providing them with free training in various vocational skills which would make them financially independent and self-sustaining.

Some of the skills provided by Justice Taiwo’s NGO include Lotion and Perfumes Production, Tailoring, Hygiene Items Production, Shoemaking, Hairdressing, Events Services, Household Items Production, Catering and Confectionery Production and different kinds of craft making. Over 150 lives have been changed positively by these efforts.

Oluwatoyin Taiwo is very passionate about helping women who are going through domestic violence. Many of such women have found solace and succor in the activities of ALSALS.

Explaining the mission of her organization, Justice Taiwo says: “If we continue to wait for the government to right all wrongs, society’s decadence will only increase. Women who have better orientation and exposure are more instrumental to a society’s well-being than women who are not. This is what we are set to achieve – making Nigerian women, especially those in low and middle – income areas, productive.”

Oluwatoyin was born in London to the late Mr. and Mrs. Pratt in September 1957 and she is from Lagos State. She had her primary education at All Saints Church School, Ibadan, Oyo State. She graduated from the University of Ife (now Obafemi Awolowo University) with a Bachelor of Law (LL.B). She later attended the University of Lagos where she earned a Master’s in Law (LL.M).

She has been a member of several professional associations among which are the Magistrates Association of Nigeria where she was the National Vice President. She was also Chairman of the Lagos State Branch of the association.

She has won several recognitions and awards due to her philanthropic work. ANSALS was named as Best NGO of the year 2021 at the Africa Lives Development Awards in Kigali, Rwanda. She has also received the Symbol of Hope Award, Nigeria; the Unseen Guest Award by MRA/LofC Nigeria and the Inspiration International Award in South Africa.

Oluwatoyin Taiwo loves travelling, reading and teaching. She is happily married with three children. Her dream for the immediate future is to set up a permanent place called “New Haven” where women and their children who are thrown out of their homes can find refuge and be encouraged.

It is in recognition of her contribution to national development in the sphere of Women Empowerment and Development that the Honourable Justice Oluwatoyin Abosede Taiwo was deemed worthy to be conferred with the Woman of Merit Gold Award which is part of the 21st PSR National Awards.