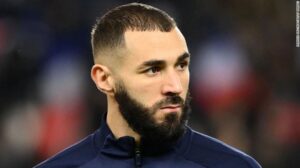 Soccer star Karim Benzema has been handed a one-year suspended prison sentence and fined 75,000 euros ($84,000) over his involvement in the attempted blackmail against former French national teammate Mathieu Valbuena with a sex tape.

The court went further than the prosecutor in its ruling on Wednesday, which only requested a 10-month suspended prison sentence against Benzema.

“It was clearly announced by the court that Karim Benzema was not aware of the prior machinations and then in the end they said that ‘he cannot, not have known,’ without any proof,” one of Benzema’s lawyers Sylvain Cormier said outside of the courtroom after the verdict came in.

“They have condemned him with a very severe, unjust sentence without proof. I’m quite shocked by this ruling.”

Benzema’s legal team said the 33-year player would be cleared “in the court of appeal.”

“We will of course appeal because Karim Benzema did nothing wrong in this affair,” Cormier said.