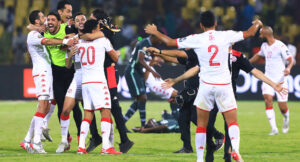 Tunisia knocked out Nigeria from the round of 16 stage of the African Cup of Nations (AFCON) tournament in Cameroon following a shock 1-0 victory thanks to a Youseff Msakni goal at the Roumde Adjia stadium in Garoua on Sunday.

The north Africans now face Burkina Faso, who eliminated Gabon after a penalty shootout, in the quarter-finals of the flagship African tournament next Saturday.

It is the first time the Super Eagles will not reach the Quarter finals stage of AFCON since 1982, while Tunisia have advanced to the quarter finals in four consecutive tournaments.

Tunisia took the lead three minutes after the restart through Msakni, the forward’s tame shot took a slight deflection off William Troost-Ekong and goalkeeper Maduka Okoye could only divert into his net for a shock 1-0 lead.

Coach Austin Eguavoen substituted Alex Iwobi and Peter Olayinka into the game, but Iwobi was sent off three minutes after coming on for dangerous play, a VAR review changing his caution to a dismissal.