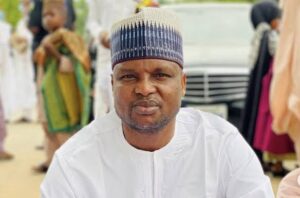 The Federal Government has commenced moves to extradite a suspended Deputy Commissioner of Police, Abba Kyari, to face fraud charges in the United States of America.

The Attorney-General of the Federation and Minister of Justice, Abubakar Malami (SAN), had on Tuesday filed an application before the Chief Judge of the Federal High Court in Abuja for Kyari’s extradition.

The application marked: FHC/ABJ/CS/249/2022 was filed under the Extradition Act.

The AGF said the application followed a request by the Diplomatic Representative of the U.S. Embassy in Abuja.

The request from the U.S. authorities, according to Mr Malami, is “for the surrender of Abba Alhaji Kyari, who is a subject in a superseding three counts indictment”.

The AGF said in the application that he was satisfied that the offences in respect of which Mr Kyari’s surrender was sought were neither political nor trivial.

The U.S. government in July 2021, named Mr Kyari, a celebrated police officer, among co-conspirators of Ramon Abass, aka Huspuppi, an Instagram celebrity, in a multi-million-dollars money laundering fraud.

Mr Kyari is named among five of Hushpuppi’s conspirators in a $1.1 million fraud charge approved by a U.S. grand jury.

Mr Kyari, while on suspension over his role in the Hushpuppi’s case, was fingered by the NDLEA in a 25kg cocaine deal earlier this year.