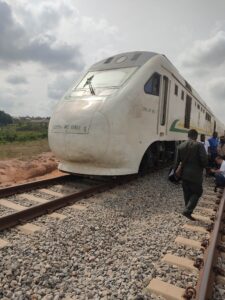 The Nigeria Railway Corporation (NRC) has temporarily suspended its service along the Abuja-Kaduna route due to to what it described as unforeseen circumstances. It made this announcement on Tuesday morning.

NRC’s statement was in reaction to the attack by gunmen who blew up the rail track, forcing the 1000-capacity train to derail around Rijana, a village on the rail corridor in Kaduna.

NRC, in a  statement via its official Twitter page on Tuesday, said: “Dear passengers, due to unforeseen circumstances, Train operations along the Abuja-Kaduna route has been temporarily suspended.

“Further Communication would be given in due course.”