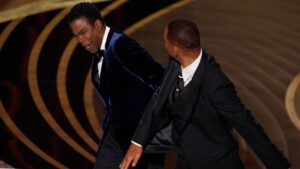 American actor and singer, Will Smith slapped ace comedian, Chris Rock in the face on stage at the Oscars held on Sunday after the comic made a joke about the actor’s wife, Jada Pinkett Smith.

“Jada, can’t wait for GI Jane 2,” Rock had said, in an apparent reference to her shaved hairdo – which is a result of the hair loss condition alopecia.

Smith walked up to the stage and struck Rock before returning to his seat and shouting: “Keep my wife’s name out of your [expletive] mouth.”

Ironically, this was one night Smith should live to remember as he was declared as Best Actor. That was his first-ever Oscar but it was announced after he had physically assaulted Chris Rock on stage and in front of live TV.

“Richard Williams was a fierce defender of his family. In this time in my life, in this moment, I am overwhelmed by what God is calling on me to do and be in this world. Making this film, I got to protect Aunjanue Ellis, who is one of the strongest, most delicate people I’ve ever met. I got to protect Saniyya and Demi, the two actresses that played Venus and Serena.

The Academy of Motion Picture Arts and Sciences, which organizes the Oscars, tweeted that it “does not condone violence of any form”.

Rock’s joke referred to a 1997 film, GI Jane, in which Demi Moore played the title role with a severe buzzcut.

The comedian looked stunned in the immediate aftermath of the incident, but told the audience: “That was the greatest night in the history of television.”

The Los Angeles Police Department later told Variety that Rock had “declined to file a police report” following the event.