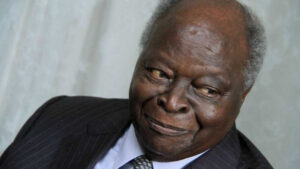 In an  announcement made this Friday by incumbent President of Kenya, Uhuru Kenyatta, Kibaki was praised for his sterling qualities.  He said:

“As a leading figure in Kenya’s post-independence history, Mwai Kibaki earned the abiding respect and affection of the people of this Nation and other nations throughout the world.

“President Kibaki will be forever remembered as the gentleman of Kenyan politics, a brilliant debater whose eloquence, wit, and charm won the day, time and time again.”

Kibaki, an economist and passionate golf player, left behind a complicated legacy when he stepped down after his second presidential term ended in 2013. He not only oversaw a new constitution that brought hope for change, he led Kenya during a period of robust economic growth and major infrastructure developments.

But he was also at the helm during the most violent election in the country’s history, when more than 1,200 people died in bloody ethnic battles after the disputed 2007 polls.