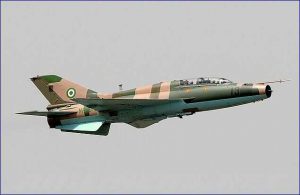 A Nigerian Air Force trainer aircraft has reportedly crashed in Kaduna State, with the two pilots on board feared dead. Details of the incident are however still sketchy.

Sources say that the trainer aircraft crashed at the Air Force training base in Kaduna during a training session on Tuesday. The aircraft was ideentified as belonging to the 401 Flying Training School.

The development comes 11 months after a NAF aircraft crashed in Kaduna. That incident, which occurred in May 2021, involved a Beechcraft 350, and the aircraft crashed around the Kaduna International Airport.

Lt.General Ibrahim Attahiru, the then Chief of Army Staff and 10 other military officers who were on board when the plane crashed were killed.