Nobody Will Be Allowed To Destabilise Nigeria — Buhari 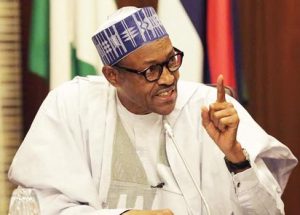 Nigerian President, Muhammadu Buhari has called on Nigerians to resist all those he termed agents who are bent on causing a breakdown of law and order in the country.

In a statement on Tuesday in Abuja by his Special Adviser on Media and Publicity, Femi Adesina, he gave an assurance that no individual or group would be allowed to destabilise Nigeria.

“We have the land, we have the resources, and we have the people but I do not know why people will allow themselves to be successfully subverted to destabilize their own country,” the President was quoted as saying at an Iftar dinner with governors, ministers, and heads of government agencies.

Buhari, who thanked the governors and ministers for honouring his invitation to break the Ramadan fast, expressed confidence that in spite of the current security challenges, the country would succeed.

On the forthcoming general elections, the President affirmed that being a beneficiary of free, fair and credible elections, the introduction of  technology and the Permanent Voters Card (PVC) will make it impossible for anyone to fraudulently claim millions of votes in the country.

In his remarks, Chairman of the Nigeria Governors’ Forum and Ekiti State Governor, Dr Kayode Fayemi commended the President for demonstrating resilience and determination at a crucial period in Nigeria’s history.

“We have a leader who is not distracted by momentary challenges but has continued to commit to the renewal of our nation and we, governors, ministers, and heads of government agencies, are equally dedicated to building a better Nigeria, on your watch,” he said.

Noting that this year’s Holy Month of Ramadan coincided with the just concluded Christian Lenten period, Governor Fayemi believed it holds enormous spiritual value on the benefits of renewal, sacrifice, almsgiving, forgiveness, and healing for the individual, as well as the nation.