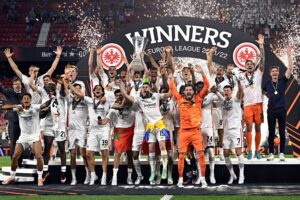 Eintracht Frankfurt beat Rangers 5-4 on penalties on Wednesday to win the Europa League final and claim their first European trophy in 42 years.

“We played 13 matches in Europe and we did not lose a single one,” said Eintracht coach Oliver Glasner. “We took it step-by-step and at the end we were rewarded. I have no words to express what I feel for the players.

“It was the last game of the season, an intense one and everyone squeezed all they had out of them. A great compliment to the players.”

The result means Eintracht Frankfurt will return to the Champions League for the first time since 1960, when they reached the final and lost to Real Madrid in their only participation in Europe’s top club competition. The 62-year wait to return to the UCL is the longest by any team in the competition’s history.

Joe Aribo had struck against the run of play in the 57th minute to give Rangers the lead, charging clear after a string of defensive errors and sliding the ball past Trapp.

The Germans bounced back as Rafael Borre snuck in between two defenders to turn in a Filip Kostic cross in the 70th.

Glasner, in his first season at the club, said it was the team’s mentality that carried them through the difficult season. While Eintracht went unbeaten in the Europa League, even eliminating more fancied opponents such as Barcelona, they struggled in the Bundesliga where they finished 11th.

“We remained positive and it was only with that spirit that this was possible,” Glasner added.

For Eintracht captain Sebastian Rode, it was a deserved finale at the end of a rocky ride.

“It was a very tough road and there was so much at stake for us tonight,” Rode said. “It is amazing what we did with this team and we deserved it. It was a great journey and we were rewarded.”

Rangers ended extra time the stronger side, but a brilliant save from Trapp ensured the game went to the shootout where the superb technique and mental strength of Frankfurt won it.