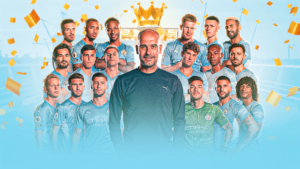 City, who knew a victory would secure them the title, were 2-0 down to Aston Villa with just 15 minutes remaining, but turned the game around with three goals in five minutes to win 3-2 in thrilling scenes to rival the famous 2012 Premier League title victory.

City have now won four Premier League titles and eight major trophies under Pep Guardiola since his arrival in the summer of 2016.

Arsenal signed off in triumphant style with a 5-1 thrashing of hapless Everton though it won’t be enough to earn them a top-four finish as Tottenham also racked up five goals in the final outing by drubbing Watford to the tune of 5-0. Heung Min Son scored two in Tottenham’s final-day mauling to become the first ever Asian player to win the Premier League Golden Boot, tied with Mo Salah on 23 goals.

Manchester United will play in the Europa League next year despite finishing their dreary season with a fittingly underwhelming 1-0 defeat against Crystal Palace. Thankfully, West Ham’s 3-1 loss against Brighton was enough to deliver the Red Devils from the ignominy of the Europa Conference League.

And Leeds’ win vs. Brentford keeps them up, as Burnley lost to Newcastle.