by People & Power
May 19, 2022
Uncategorized, World News
No Comments 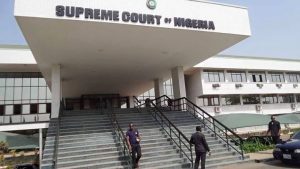 The supreme court has granted the application by Rivers state to be joined as a defendant in the suit filed by President Muhammadu Buhari and the attorney-general of the federation (AGF) seeking to void section 84(12) of the Electoral Act 2022.

A seven-man panel of the Justices of the apex court led by Justice Musa Dattijo, allowed the joinder application that Rivers State brought through the Speaker of its House of Assembly and its Attorney-General, even as it shifted hearing on the suit till May 26.

The applicants told the court that the were opposed to the suit marked SC/CV/504/2022, which originally had the National Assembly as the sole Respondent.

They are among other things, seeking, “a declaration that the joint and or combined reading of Section 65, 66, 106, 107, 131, 137, 147, 151, 177, 182, 192 and 196 of the Constitution, the provision of Section 84 (12) of the Electoral Act, 2022 which also ignores Section 84(3) of the same Act, is an additional qualifying and/or disqualifying factors for the National Assembly, House of Assembly, Gubernatorial and Presidential elections as enshrined in the said constitution, hence unconstitutional, unlawful, null and void”.

“A declaration that having regard to the clear provision of section 1(3) of the Constitution read together with section 4 of the same Constitution, the legislative powers vested in the defendant do not permit or empower it to make any other law prescribing additional qualifying/disqualifying grounds for election to the national assembly, house of assembly, gubernatorial and presidential election outside the express constitutional qualification and disqualification provisions as already provided in each or all of sections 65, 66, 106, 107, 131, 137, 147, 151, 177, 182, 192 and 196 of the 1999 constitution of the Federal Republic of Nigeria (as amended), and without amendment to any of those sections is for the reason of inconsistency, unconstitutional and therefore null and void.

As well as, “An order nullifying the provision of Section 84 (12) of the Electoral Act, 2022 by application of the blue-pencil rule, for being unconstitutional, illegal, null and void and having been made in excess of the legislative powers of the defendant as enshrined in section 4 of the constitution (as amended).”