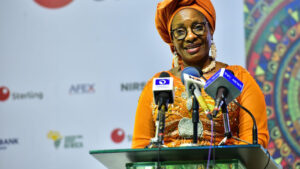 Minister of Women Affairs, Dame Pauline Tallen, said she has withdrawn her ambition to represent Plateau South Senatorial District in the Senate.

The minister noted that she will continue to serve Nigeria as Minister of Woman Affairs.

“I relish the opportunity to serve Nigerian Women in my capacity as Minister of Women Affairs under the leadership of President Muhammadu Buhari, GCFR,” Tallen said. “Consequently, I wish to inform you all that I have to withdraw from running for the Senatorial seat.

“With profound gratitude and great humility, I voluntarily stepped down from the Senatorial race, having consulted widely with my family and close associates.”

Tallen, however, endorsed Senator Nora Dadduut for a seat to represent Plateau South Senatorial District in the Senate.

“Once again I thank the good people of Plateau State Southern Senatorial District and appeal to them to continue to support the incumbent Senator, Prof. Nora Daduut to sustain Women’s political force in the state and in Nigeria,” Tallen said.

President Buhari had on Wednesday last week directed all appointed members of the Federal Executive Council (FEC) running for elective offices to resign on or before May 16.

the President held a valedictory session for the affected persons to appreciate them for their service. Since, the President’s directive, some of the ministers have reconsidered their decision to vie for elective offices.

The Attorney-General of the Federation and Minister of Justice, Abubakar Malami, as well as the Minister of Labour and Employment, Chris Ngige, have also pulled out of the Kebbi State governorship election and presidential race respectively.