United Kingdom Records Highest Ever Temperature Of Over 40C 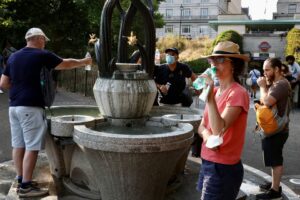 The UK has hit its hottest temperature on record, with 40.2C recorded at Heathrow in London, according to provisional Met Office data.

The Met Office tweeted: “For the first time ever, 40 Celsius has provisionally been exceeded in the UK. London Heathrow reported a temperature of 40.2C at 12.50pm today.”

The forecaster will however need to validate the equipment used to record any record temperature before it becomes official.

The UK, which can struggle to maintain key transport services in extreme heat or the snow, has been put on a state of “national emergency” over the unprecedented temperatures.

The arrival of a searing heatwave that first sparked wildfires across Europe before arriving in Britain has turned the spotlight on to “net zero” pledges made by the candidates running to replace Boris Johnson as prime minister.