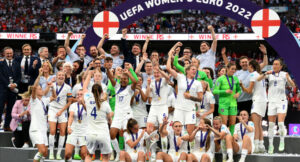 England have won their first major trophy since 1966 after the Lionesses beat Germany in a thrilling  Euro 2022 final in front of a record 87,192 fans at Wembley.

“The world will change, we know that,” said Wiegman, whose post-match press conference was interrupted by the England squad singing “football’s coming home!”.

“We change society and that’s what we want, that’s so much more than football.

With England winning all five of their matches on route to the Euro 2022 final, it was no surprise to see Wiegman name the same side for a sixth game in a row.

It was the first time in the history of the Euros – men’s or women’s – that an unchanged team has played in every match, and meant that ‘super sub’ Alessia Russo remained on the bench.

Under Wiegman, England are unbeaten in 20 games but were pushed to the limit by the eight-time winners despite missing the massive presence of Popp.

The Wolfsburg striker, who missed the entirety of Euro 2013 and 2017 through injury, had scored six goals in five games en route to the final.

Despite losing their major goal threat and facing the intimidating atmosphere of a full Wembley waiting to party, Germany still posed a threat and came close to opening the scoring early in the second half when Magull prodded just wide.