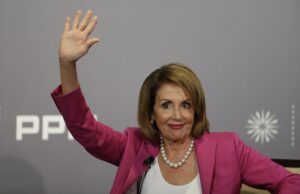 US House Speaker Nancy Pelosi landed in Taiwan in defiance of Chinese threats, making her the highest-ranking American politician to visit the island in 25 years.

China has repeatedly issued warnings over Ms Pelosi’s visit to Taiwan, with multiple media reports saying Ms Pelosi and five other House members for a Congressional delegation will stay Tuesday night in the Taiwanese capital, Taipei.

Ms Pelosi left the US on Sunday and began her visit in Singapore. Her office has said she will also travel to South Korea and Japan.

US House Speaker Nancy Pelosi said minutes after touching down in Taiwan on Tuesday that her trip, marking the highest-level visit by a US official in more than two decades, was a sign of “America’s unwavering” commitment to supporting the island nation.

“Our discussions with Taiwan leadership reaffirm our support for our partner & promote our shared interests, including advancing a free & open Indo-Pacific region.”

“America’s solidarity with the 23 million people of Taiwan is more important today than ever, as the world faces a choice between autocracy and democracy,” the House speaker continued in a thread, before emphasising that her delegation’s visit “in no way contradicts longstanding United States policy, guided by the Taiwan Relations Act of 1979, U.S.-China Joint Communiques and the Six Assurances.”

“The United States continues to oppose unilateral efforts to change the status quo,” she closed, before sharing a link to her office’s full statement on the unprecedented trip to Taiwan.

The House speaker’s visit to Taiwan, which is independently governed but claimed by the Chinese government as part of its own territory, comes amid tensions between Washington and Beijing over US support for the island.