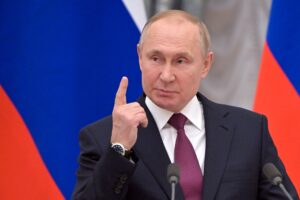 Russian President Vladimir Putin has proclaimed the annexation of four partially occupied Ukrainian regions at a signing ceremony in the Kremlin.

Russia declared the annexations after holding what it called referendums in occupied areas of Ukraine. Western governments and Kyiv said the votes breached international law and were coercive and unrepresentative.

“This is the will of millions of people,” he said in the speech before hundreds of dignitaries at the St George’s Hall of the Kremlin.

The exact details of Russia’s annexation remain unclear but it appears that Russia is laying claim to about 109,000sq km (42,000sq miles) of Ukrainian territory, or about 18 percent, in addition to Crimea, which Russia annexed in 2014.