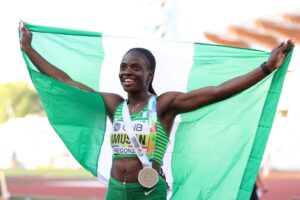 The World Athletics has ratified the women’s world 100m hurdles record set by Tobi Amusan at the 2022 World Championships.

This was disclosed on the athletics body’s official website via a statement on Tuesday.

Amusan had run a time of 12.12 seconds defeating former world record holder, Kendra Harrison, who had set the world record in the 100 metres hurdles with a time of 12.20 seconds in 2016, at the London Müller Anniversary Games,

Last Thursday, September the 15th, she bagged the officer of the order of the niger (OON) award as president Muhammadu Buhari honoured the country’s athletes for their spectacular performances in several competitions.