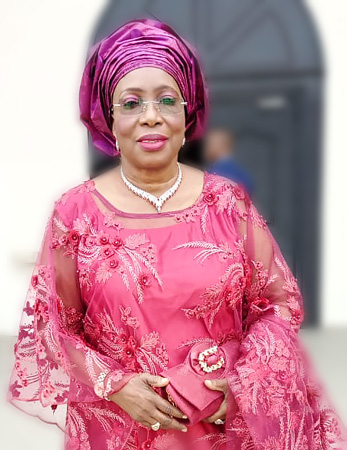 Dame Oluwatoyin Adebola Joseph is highly trained and versed in many aspects of healthcare. She is at once a registered midwife, a registered nurse, a trained health administrator and manager, a graduate of Health Education and Kinetics as well as an expert in Public Health.

For over three decades, she has deployed her skills to serve humanity through healthcare delivery. Today, she works as Medical Director and Chief Executive Officer of Retmed Physiotherapy & Wellness Centre in Lekki, Lagos.

In 1996, she earned the Diploma in Health Administration and Management from the University of Benin. She went on to bag a B.Sc in Health Education and Kinetics from the same university in 2001. In the year 2014, she had an M.Sc in Public Health from the College of Medicine, University of Lagos.

Dame Oluwatoyin Adebola Joseph was born on the 28th of April, 1958 in Benin City, in the then Mid-Western Region of Nigeria, to Venerable Robert StephenAdebayo Ayodele (of Ikere – Ekiti) and Mrs. Elizabeth Aidevo Ayodele (Nee Ifidon), of blessed memory. She is the second daughter bout fourth of eight children.

She started her work experience with the Ogun State Ministry of Health where she served in various hospitals and had her in-service training from June 1980 to September 1983.

She worked at Creek Hospital, Awolowo Road, Ikoyi, Lagos from September 1983 to November 1985. She joined the services of the Nigerian National Petroleum Corporation in December 1985 and for several years, she worked in various locations as follows:

Dame Oluwatoyin Joseph is a member of many professional associations. She is Member, Society of Quality Health in Nigeria (SQHN), Member, African Institute of Public Health Professionals, Fellow, West African College of Nursing (FWACN) and Fellow, Institute of Health Insurance and Managed Care.

She has been honoured with a lot of awards and recognition. They include: Leadership Award at the Chief Officers’ Management Development Programme Batch 050 as Vice President – 2008; Appreciation Award for Contribution to the 2019 Youth & Children’s Summer Workshop; Archdeaconry Award in recognition of her commitment as a Steward in her Archdeaconry 2019; Grand Patroness Award 2020; Episcopal Award by the Lord Bishop of Sabongidda –Ora Diocese, 21st July, 2021 and Award of Recognition by St. Andrew’s Church, Aiyeteju, Lagos Diocese for support to the Church on the 28th November, 2021.

Mrs. Joseph is a very committed Christian. She is a member of Church of the Pentecost, Abraham Adesanya Housing Estate, Ajah, Lagos where she is a very active member of the Guild of Stewards both at the Parish and Diocesan levels. She is the Coordinator of the Guild of Stewards in her parish, an active member of the Mothers’ Union and Women’s Guild and a member of the Harvest Committee where she has been serving for several years till date. She is the Chairperson of the Medical Committee in the PCC and Patroness of the Youths of her parish.

Dame Oluwatoyin Joseph is also a member of the Lagos Diocesan Medical Commission. (LDMC EXCO). She is an ardent supporter of God’s work and a Dame in the Order of the Knighthood of Saint Mary (KSM), Sabongida –Ora Diocese.

She is a lover of sports especially Squash, which she played actively and she even represented NNPC several times during the National Oil and Gas Industry Games (NOGIG). She won several medals during these tournaments. She also loves music and travelling.

In retirement, she is still busy giving back to the society due to her passion for the Nursing profession. As indicated earlier, she is the CEO of a company called Retmed Physiotherapy and Wellness Centre, which is a centre for rehabilitation of patients post- operative in Neurological and Musculo-Skeletal conditions in Lagos. The centre has impacted lives positively since its inception due to the dedicated and committed team of physiotherapists, nurses, and caregivers who work there. This is attested to by the testimonials by clients who have passed through the company’s facilitiy.

She is married to her heartthrob, Sir Najite Joseph and the marriage is blessed with three lovely children.

It is in recognition of her accomplishments in Physiotherapy and Medical Rehabilitation Services in Nigeria that Dame Oluwatoyin Adebola Joseph was deemed worthy to be conferred with the Nigerian Achievement Award.