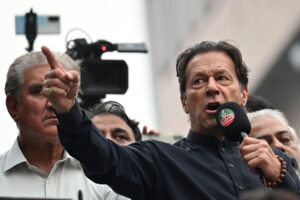 Former Pakistan Prime Minister Imran Khan was wounded in the leg when his convoy was shot at in the country’s east.

Imran Khan was leading a protest march to Islamabad to demand snap elections.

“I strongly condemn the firing at Imran Khan’s rally. An immediate report of the incident has been sought from the Interior Minister. We pray for the speedy recovery of Imran and other injured. The Federation will provide all possible support to the Punjab government in the security/investigation of the incident. Violence should have no place in national politics,” Pakistan Prime Minister Shehbaz Sharif said.

Local media showed footage of the attacker raising a gun before being stopped by a young man identified as Ibtisam.

Speaking to reporters, Ibtisam said he was standing next to the container carrying Khan when he saw a man walking towards it and drawing his gun.

“He loaded the magazine and was preparing to fire. I approached him when he shot one bullry in air. I pulled at him, which caused his aim to go awry. He then tried to run away but people went after him and we managed to stop him,” he said.