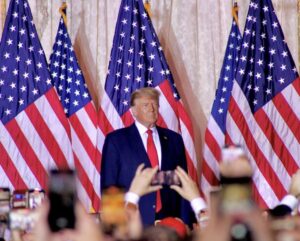 Former United States President, Donald Trump, has officially launched a third bid for the US presidency.

In order to make America great and glorious again, I am tonight announcing my candidacy for president of the United States,” Trump told a crowd gathered at Mar-a-Lago.

Mr Trump said that “everybody was doing great” after his four years in office, “the world was at peace” and that he “kept his promises”.

“The decline of America is being forced upon us by Biden and the radical left… this is not a decline we must accept.”

Ahead of his speech, Mr Trump’s aides filed paperwork for his 2024 presidential bid.

His declaration to stand comes as Republicans are still reeling from voters’ rejection of several of their candidates in the US midterm elections – many of them personally chosen and endorsed by Mr Trump.