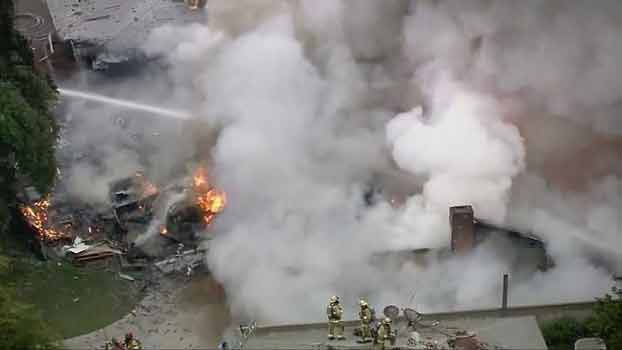 Authorities in California say four people have been killed and two others seriously injured after a small plane crashed into two homes and sparked a huge fire.

At least four bodies have been found in the wreckage but firefighters have not been able to ascertain how many were from the plane and how many were in their homes.

The Cessna 310 aircraft  which was headed for San Jose, crashed moments after taking off from Riverside Municipal Airport and collided with two homes, said Riverside Police Lieutenant, Charles Payne.

Three witnesses told TV stations that a woman crawled out from one of the houses with her clothes on fire, saying that she was the pilot and that more people were trapped inside.

“As soon as we saw it fly over, we knew it wasn’t a good thing. We watched it go down very quickly…Before we knew it, there was a loud crash and huge plumes of smoke,” said Shannon Flores, a teacher at an elementary school about three blocks away from the site.