Odigie-Oyegun Congratulates Secondus On His Emergence As PDP Chairman 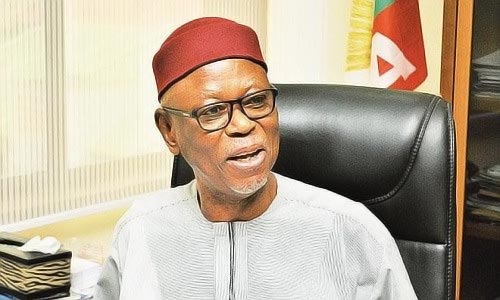 In a statement issued on Tuesday in Abuja, Chief Odigie-Oyegun on behalf of the APC expressed hope that the new executives of the PDP would reposition the party to enable it provide a responsible opposition in the country.

He said: “On behalf of our great party, the All Progressives Congress, APC, I congratulate the new National Chairman of the Peoples Democratic Party, PDP, Prince Uche Secondus on his election at the PDP’s recent National Convention. I also congratulate other newly-elected PDP National Officials.

“It is my hope that the newly-elected PDP National Chairman will use his experience garnered over the years to ensure that the PDP assumes its role as a responsible opposition party in the country.”

He noted that true democracy could not thrive without an effective opposition and urged the new PDP leadership to always put the welfare of the nation above all other partisan considerations.

He pledged to robustly engage Secondus in an atmosphere free of acrimony and rancuor because according to him, working together would elevate the language and temper of politics in the country which would in turn provide an enabling environment for the growth of democracy in Nigeria.