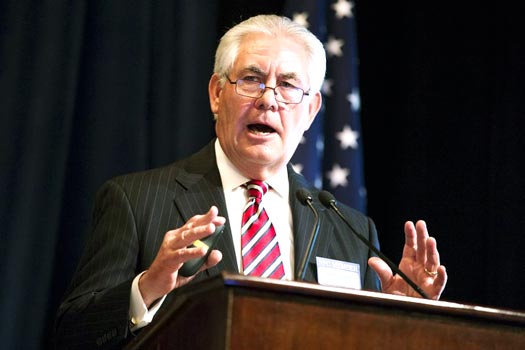 Barely few hours after cutting short his visit to some African countries to return to Washington DC, United States Secretary of State, Rex Tillerson has been sacked by President Donald Trump.

In a tweet released few hours ago, Trump said former Director of the Central Intelligence Agency (CIA), Mike Pompeo would take over Tillerson’s position while Gina Haspel was nominated to become the country’s first woman Director of the CIA.

Speaking to reporters outside the White House on Tuesday, Trump said his differences with Mr. Tillerson came down to personal chemistry as they had often disagreed on a variety of national issues.

“We got along actually quite well, but we disagreed on things. When you look at the Iran deal, I think it’s terrible. I guess he thought it was ok.

“I wanted to either break it or do something and he felt a little bit differently, so we were not actually thinking the same. With Mike, Mike Pompeo, we have a very similar thought process. I think it’s going to go very well. Rex is a good man, I like Rex a lot,” Trump said.

Tillerson, a former Chief Executive of ExxonMobil who was appointed over a year ago was on an official tour of Africa but had to cut the tour by a day due to what his spokesman described as ‘pressing issues in Washington DC.’

A top State Department official and aides to the fired Secretary of State claim they found out Tillerson had lost his job after they read it on Twitter. Trump’s tweet was as follows:

Tillerson’s departure comes after months of tension between him and Trump. Tillerson was notified of his disengagement via Trump’s tweet. His last official duty was his diplomatic visit to Africa where he met some African heads of government including President Muhammadu Buhari in Abuja, yesterday.